Origins of the pinto colouring

A pinto equine has a coat color that consists of large patches of white and any other color. The distinction between "pinto" and "solid" can be tenuous, as so-called "solid" horses frequently have areas of white hair.

Many breeds of horse carry pinto patterns. Pinto coloring, known simply as "coloured" in nations using British English, is most popular in the United States. While pinto colored horses are not a "breed," several competing colour breed registries have formed to encourage the breeding & promotion of pinto-colored horses. The word "paint" is sometimes used to describe pinto horses, but today is specifically used for the American Paint Horse, which is a pinto-coloured horse with identifiable American Quarter Horse or Thoroughbred bloodlines, and is a recognized breed.

Pinto patterns are visually and genetically distinct from the spotting patterns characteristic of horse breeds such as the Appaloosa. Breeders who select for color are often careful not to cross the two patterns.

Although pinto coloration is rare in the wild, people have always had an eye for animals of unusual colors and a desire to deliberately breed for them. Images from pottery and other art of ancient antiquity show horses with flashy spotted patterns. Images of spotted horses appear in the art of Ancient Egypt, and archaeologists have found evidence of horses with spotted coat patterns on the Russian steppes before the rise of the Roman Empire. Later, spotted horses were among those brought to the Americas by the Spanish.

By the 17th century in Europe, spotted horses were quite fashionable, though when the fad ended, large numbers of newly-unsellable horses were shipped to the Americas, some for sale, and others simply turned loose to run wild. The color became popular, particularly among Native Americans, and was specifically bred for in the United States, which now has the greatest number of pinto horses in the world.

The word "pinto" is a Spanish word literally meaning 'painted' and also 'dappled' or 'spotted'. 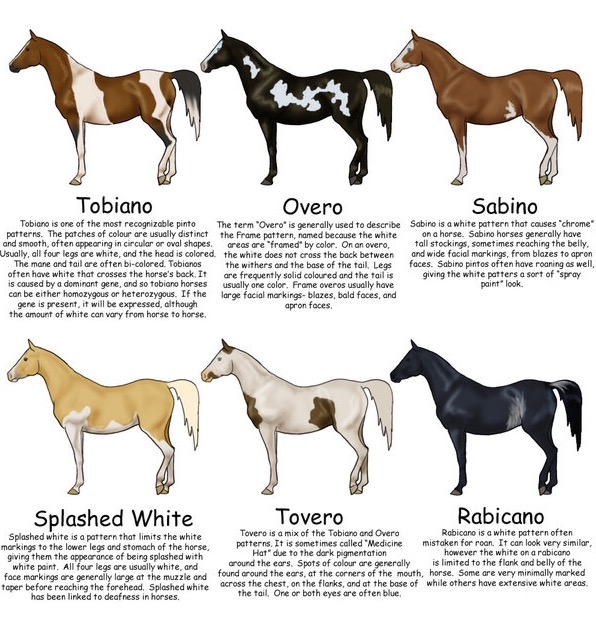